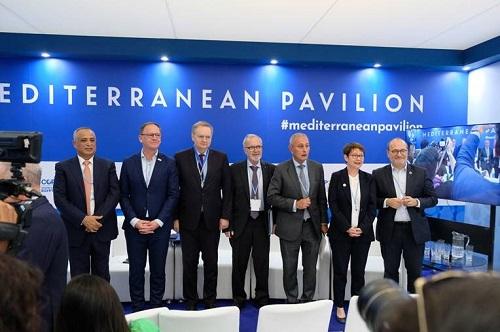 The Mediterranean Sea basin is a recognised marine biodiversity hotspot and a vital resource of economic activities for 480 million people living in the region’s 22 countries. It is the fifth largest economy in the region after France, Italy, Spain and Turkey, generating an annual economic value of more than US$ 450 billion. However, the Mediterranean Sea’s ecosystem is under threat from habitat loss and degradation, over-fishing, pollution and climate change.

Achieving these goals, the Partnership aims at supporting and attracting investments in the sustainable blue economy and policy reforms, prioritising innovation and including where possible, natural capital and nature-based solutions for climate mitigation and adaptation. Financing of wastewater treatment facilities, solid waste management and plastic waste reduction, will help reduce pollution going to the sea, decrease pressure on fisheries through sustainable aquaculture, improve coastal resilience investments, and reduce emissions through sustainable marine mobility.

The Blue Mediterranean partnership intends to create a new financial vehicle, pooling contributions from donors and beneficiary countries in the Southern Neighbourhood, to provide both capital expenditure and technical assistance grants for sustainable blue economy projects, that will help close an estimated €6 billion investment gap in the next 8 years.