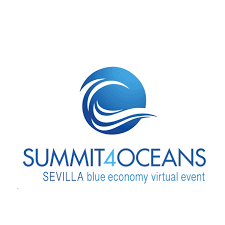 The SUMMIT4OCEANS Sevilla Blue Economy Virtual Event aims to involve and sensitize Companies, Governments, Administrations and Citizens in the Blue Economy, in short, the whole of society, and Seville and its area of influence.

The initiative, co-organized by Fibes Sevilla, is part of the project of the Andalusian capital city council to promote innovation, technology and sustainable development in Spain, with a clear international vocation. The Blue Economy, based on the development of the oceans and their environment, aspires both to ecological sustainability and economic growth.

Today, science and technology make possible the regeneration of the environment and sustainable management, opening great opportunities in the field of collaboration between the business, financial and scientific fabric, which can be promoted by the Administrations. On the other hand, the current Coronavirus pandemic has highlighted the need to maintain biodiversity so as not to favor the spread of diseases.

The Summit, chaired by the Mayor of Seville, Juan Espadas, pursues the objective of showing the relationship between the growth of the Spanish economy and the Blue Economy, a sector in which Spain has a prominent sectorial niche and, therefore, can play a leadership role, involving an entire economic and scientific ecosystem. It should be noted that, in Andalusia, the Blue Economy represents more than 300,000 jobs and a contribution of between 8 and 10% to the IB of the Community.

The SUMMIT4OCEANS Sevilla Blue Economy Virtual Event is a global debate forum that will allow participation from anywhere in the world. Seville and Spain will be the spearhead of the Blue Economy sector globally.

The Summit will address the economic and social opportunities generated by a new industry, through the development of ecosystem goods and services from the reconstruction of the marine environment and the wealth that it generates. An opportunity to promote the Blue Economy, based on the sustainable development of the oceans.

You can learn more here and access to the registration form here.